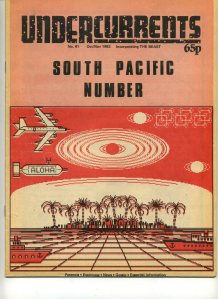 5 Eddies – NIREX, City Stopped, US Peace Camp and other news

12 Yanomano – Tribal rhythms in aid of the World Wildlife Fund

13 The Genius – Andrew Tyler, who has an IQ at least in double figures, interviews Howard Brenton.

15 Red Death – Greenpeace inform us of poisons in the sea

Yes, it is high time. In fact maybe it would be more realistic to describe ourselves henceforth as sporadical. This is only our fourth issue this year, and every issue has been a struggle to produce. It’s no secret that we’re desperately short of funds – and no money means no magazine.

Recently we’ve tried a few schemes to boost our circulation, and our staff have foregone pay for several months, but our position isn’t improving. Our friend John de Lorean offered to do a massive coke run for us, but unfortunately he got caught. Now we’re running out of ideas.

Should we blame the Tories for the mess we’re in? A disproportion­ate number of alternative papers have gone under since Mrs Thatcher came to power. Should we perhaps blame our non-existent business manager who absconded with our non-existent funds? Or is it just down to the fact that no one’s interested in our product? If so, then what’s wrong with us – and what’s right? We’d be very interested to hear from you. Why don’t you tell us what you’d like in the magazine? Should we have more AT, fewer poodles, wider political coverage, a campaign notice board … ?

All correspondence will be read and choked over, and any cash which you may inadvertently slip to us instead of the IR, we will eagerly bank. Without you we’re in danger of rapid decay . . .