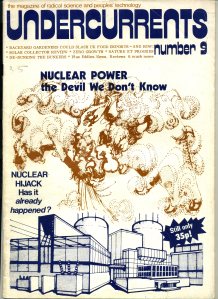 1 EDDIES: – Duncan Campbell: Heathrow – Was There a Nuclear Threat?

8 Friggin’ on the Rig – Gusher

41 REVIEWS: Offensive Missiles/ We shall not be MIRVed/ Race & IQ/ Value Today/ Limits of the City/Makin’ It/ Fields, Factories &Workshops

“Wot’s this?”, you may well be thinking. “Advertising? In Undercurrents?” You may well feel we owe you an explan­ation. Here it is.

Until recently, we’ve rejected display advertising because we felt that anything worth saying to our readers could be said in a small ad. We also felt we didn’t want to give a platform in our magazine to organisations we either disapproved of or were indifferent to, just because they could pay for space. And we didn’t want to become depend­ent on advertising revenue to the extent that it might affect our ability to publish if it were withdrawn. What’s more, we didn’t want to run the risk of being accused ( however unfairly) of tailoring our editorial policy to suit our advertising market.

What we hadn’t envisaged was a situation where we might want to give more than small-ad space to announcements of products or services which the majority of our readers would be keenly interested in. But this, with the emergence of dozens of  “AT” products on the market over the past year, is exactly what’s happened.

If our readers, and our potential readers, can’t read about such products and services in Undercurrents, then they will find another magazine which gives them the information they want without setting it in the radical social and political context which, we believe, is vital if  “alternative technology” is ever to help build a better society.

Of course, we still won ‘t allow advertisers to take up valuable space in the magazine unless we feel they have something interesting to say, and we’ll refuse to accept any ads which we feel are misleading, or are a waste of space. As a deterrent, we’ll be charging more per column inch as space increases, not less (most magazines do the opposite). And we’ve set an upper limit of one page per ad.

Moreover, we’re moving on to the offensive in tackling the proliferation of AT hardware by starting a Product Reviews section. In each issue, we’ll analyse a particular product in detail, pointing out its disadvantages, its advantages, and the value for money it represents. We also hope to probe the methods and motives of the companies producing these various devices. In each issue there will also be a directory section giving names and addresses of manufacturers, and eventually, a brief “potted” review of their products. And for those who prefer to roll their own instead of buying off-the-shelf devices, we’ll have a regular DIY Project section.

To avoid becoming dependent on ad. revenue, we will set the cover price so that it pays completely for at least 48 pages of editorial content in each issue. If there are more than 4 pages of advertising in any issue, we will add a total of eight pages to the magazine’s size. So advertising, while not subsidising the basic magazine, will help to make it bigger (assuming we get any, of course). We also undertake to investigate any complaints from readers who feel that have been misled by any ad. in Undercurrents and, if the complaint is justified, to have the advertisement corrected or withdrawn.

Undercurrents is designed and edited by Sally and Godfrey Boyle. Pat Coyne edited the Nuclear Power section. Tony Durham and Martin Ince handled the reviews, and Martin Ince and Barbara Kern put the ads ( and who knows what else) together. Peter Harper sez he’s going to Australia but nobody believes it yet, and Chris Hutton Squire says he’s going to get us organised but nobody believes that either. Jenny and Janet did some of the setting, the rest being hacked out on the UC Executive. Richard Elen produced sounds and drew nice pictures. Brian Dax screened the Pics, and Brian Ford helped with the subs. Thanks to Nigel and Mary and the Finchley Road folk for handling the letters and answering the phone.

If you’re interested in helping on Undercurrents in any way, you might like to come along to one of our weekly meetings. Space is limited, but ring 01 794 2750 for details of when the meetings are held, and where. (Applications from members of the Special Branch should be in writing). Give us notice, and you’ll be welcome to come and meet the odd bunch who run the show at the moment: but be warned, you may find yourself landed with some work to do.