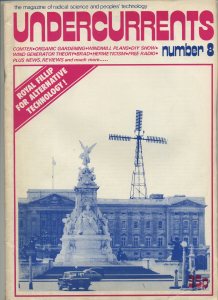 8 COMTEK: a Celebration of People’s Tech

12 Interview with Gerard Morgan-Grenville of the National Centre

19 The Other London Underground – Anarchists Anonymous

Yes, yes, we know UNDERCURRENTS is late again. Why?

Well because, as you’ll appreciate if you read Chris Hutton-Squire’s tear jerking account of our financial position, the magazine is grossly under-capitalised. This means we have to do things the long, laborious way, because it’s the only way we can afford – we’re only just beginning to get our subscribers on to a simple, stencilled addressing system, for instance: up to now, we’ve done it all by hand. Being under-capitalised means we can only afford to pay a half salary to the poor, starved wretch who edits the magazine, with the result that he has to go grubbing around for additional work to keep body and soul together. (pause for sob).

One additional source of work, and also of capital for the magazine, has been our project to produce a book on ‘Radical Technology’, for which we have received an ‘advance’ from Wildwood House in the UK, and Pantheon Books in the States. Radical Technology (can anyone think of a better title?) will consist of about 290 A4 pages covering Energy, Food, Shelter, Materials and Communications, and quite a bit more. It’s due for publication sometime in the first half of 1975, and we think when our readers see what’s in it, they’ll forgive us for always being late with the magazine.

But test readers get the impression that our monetary situation is so precar­ious that we’re about to fold, let us reassure them (a la Court line) that although the magazine is losing a little money ( say about £100 an issue at the moment) the surplus on the book (when we get all the money from the publishers) ought to be enough to offset the loss on the last few issues. Meanwhile we hope to have built up the circulation near to our break even point. We have always’ believed in giving readers as much information as possible about why, and how, we produce the magazine: that’s why we issue these little explanations now and again. Having explained the constraints we work under, we hope you’ll understand if we don’t post out copies to you as quickly as we might, or if we leave letters unanswered for long periods, or if the next issue is also a bit late in appearing.

Apologies also to readers who expected another instalment of AT-Man: trouble is, we couldn’t think of a good story line to get him out. of the dilemma we put him in in UC6. Any suggestions? You may also have been expecting Peter Harper’s guide to Sources and Contacts in Alternative Technology to have continued in this issue. Well, it would have, had Peter not been stricken by flu for a week just before publication. Next issue, we’re promised.

COPYRIGHT. All articles in Undercurrents are Copyright @ unless otherwise stated. But we will give permission free­ly to non-profit groups who wish to reproduce our mater­ial, without charge, provided they credit Undercurrents.

Undercurrents is designed and edited by Sally and Godfrey Boyle. Pat Coyne looks after News, Tony Durham takes care of reviews, and Peter Harper keeps thinking up reasons why we ought to keep on doing whatever it is we’re doing. Or not, as the case may be. Chris Hutton-Squire maintains a cheerful despair about our finances, and fatalistically tries to sort us out. Jenny Pennings set the type, except for a few thousand words (these included) set on dear ole Aunt Ann Ward’s composer at dead of night (yawn). Brian Dax screened the pics, and George Bowden kindly helped with the pasting up. Nigel and Mary and the Metro folk handled the incoming mail and tolerated our eccentricities.